On 17 March 2020, the day after the British prime minister Boris Johnson announced the lockdown, I felt a compulsion to help with the Coronavirus crisis and began teaching live daily meditation sessions on Facebook, which turned into series of themed talks uploaded on my YouTube channel ‘Compassionate Response to Covid-19 with Mahabodhi.’

In one series – called ‘Meet the Order‘ – I made an interesting discovery. Interviewing friends who were fellow members of the Triratna Buddhist Order I noticed that when I interviewed two together the tone was relaxed, easy, but took on a certain level of depth and subtlety, and I was reminded of a  discussion programme broadcast in the UK between 1987 and 2003 on Channel 4 television and later on the BBC called After Dark. It aired live at midnight on Saturday night and ran open-endedly throughout the night – often lasting for three or more hours – attaining widespread acclaim:

After Dark earned a remarkable spread of critical enthusiasm, from the Socialist Worker (“my favourite chat show”) and The Guardian (“one of the most inspired and effective uses of airtime yet devised”), and The Daily Telegraph (“A shining example of late-night television”), to more media focussed journals such as the BFI’s Sight & Sound (“often made The Late Show look like the Daily Mirror“) and even the US showbiz bible Variety in its review of the year (“compulsive for late-night viewers”).The Listener magazine called it “The programme in which you can see the people think” (1) 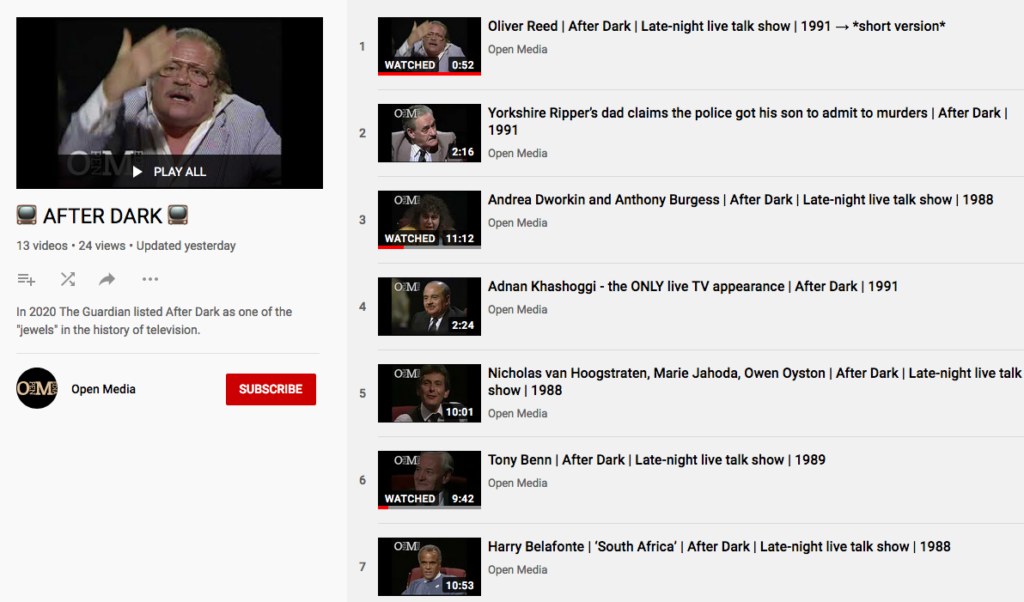 Open Media – After Dark’s production company – recently uploaded excerpts from these iconic TV programmes onto YouTube, and there has been a recent rekindling of interest in the programme: in 2020 Simon Heffer wrote in a Daily Telegraph article No Twitter mobs, just intelligent debate, that “the time is surely ripe for the return of a programme such as After Dark, and from an article in The Guardian called Rerun the jewels: the TV shows we’d like to see back on the box: “With no host, no audience and a distinct lack of commentators fighting an unending culture war, it offered a thing that’s now extinct: constructive debate.”

Constructive debate is important in today’s chaotic and divided world, yet instead of the ‘currency of debate’ being solely about the exchange of ideas, I thought it would also be helpful if another key aim of the conversation was to bring more of the humanity of the participants into visibility; the Buddha taught that the truly human society is brought about through four means: i) human beings who exemplify the qualities society wishes to see; ii) communication which is kind; iii) the practice of generosity and iv) collaborative and constructive work alongside others (2.)

To help with this aim I have therefore come up with a ‘theoretical structure’ for selecting the participants for discussion, based upon a threefold division. The original After Dark consisted of ‘a lively mix of academics, experts and celeb wildcards’ (The Guardian.) What will be more pertinent today will be a mixture of:

It would be great to get people like Wim Hof or Grayson Perry involved. This ‘theoretical’ structure is based upon two overlapping models, see Appendix below.

Dr. Mihaly Csikszentmihalyi – a foremost authority on Positive Psychology – posits that Creativity (with a capital C) involves the completed interaction between the creative individual – known as ‘the person;’ the field they are creative in – known as ‘the field;’ and the broad culture – known as ‘the domain,’ as in the following diagram: 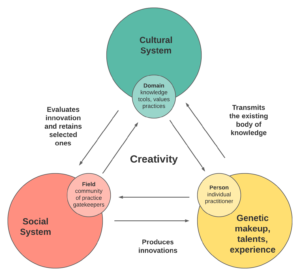 The Systems Model of Creativity (3)

The artist painting the picture is not the end of the Creative process. Only after the painting a) has been critically accepted by the ‘gatekeepers’ in the visual art field (gallery owners and critics) and b) has been assimilated into the broad culture and become what the public thinks of as mainstream (e.g. when Van Gogh’s Sunflowers are hanging in the UKs’ National Gallery) can the process of Creativity be said to be complete.

Likewise any invention, e.g a smartphone, has to go through the process of: a) invention, b) mass production, c) wide availability.

The circle then continues as other creatives respond to the mainstream with new creative artworks / movements or inventions.

According to the Buddhist teacher Reginald Ray a similar process takes place as Buddhism develops. In his book Buddhist Saints in India: a study in Buddhist values and orientations (4) Ray proposes that the Buddhist tradition functions not, as is traditionally understood, as a twofold interaction between monk and lay person, but instead as a threefold interaction between what he calls the Forest Renunciant, the Settled Monastic, and the Lay Practitioner.

In his 2010 talk ‘Being Radical – 40 Years of the New Society‘ Vajragupta retitles Ray’s categories the Solitary Retreatant, the Sangha Builder (the Sangha is the community of Buddhists) and the Social Activist. I used his categories in a talk I delivered at the Manchester Buddhist Centre called ‘Work as Spiritual Practice‘.

We can think of there being three kinds of Buddhist:

a) the Forest Renunciant / Solitary Retreatant. Csikszentmihalyi’s creative individual correlates with Ray’s Forest Renunciant and Vajragupta’s Solitary Retreatant. Like the creative individual the Forest Renunciant is the solitary figure retreating from the world: the Buddha lived with his disciples in the forest. In particular the Forest Renunciant focuses on the task of meditation and spiritual development, where their solitude gives them the opportunity to focus on that task undistractedly. In the fire of their isolation they hone the purity of vision,  connect more deeply with inner inspiration and human values, and learn, whether they like it or not, to become more human: here I think of how when Tom Hanks’ character in the film ‘Castaway’ emerges from solitude, he is more sensitive to the things of importance.

b) the Settled Monastic / Sangha Builder. Csikszentmihalyi’s ‘Field,’ or Institution, correlates with Ray’s Settled Monastic and Vajragupta’s Sangha Builder. In life there is always a needs for institutions, and for people to build and maintain them. The Settled Monastic lives and works in the Buddhist institution and are the public face of Buddhism; it is they who effectively decide what the public sees of Buddhism, that any teaching is delivered at an appropriate level, hence the need for lineage and hierarchy within the Buddhist institution: people need to be guided toward particular teachings only when they are ready for those teaching. In Triratna Buddhism today the Sangha Builder might help run a Buddhist Centre or be a preceptor; in South East Asia they would be a monk.

c) Lay Practitioner / Social Activist. Csikszentmihalyi’s ‘Domain’ or Representative of Mainstream Culture correlates with Ray’s Lay Practitioner and Vajragupta’s Social Activist. The Lay Practitioner predominantly lives and works in the world, with the stress and strain entailed. In all likelihood they will have a job, maybe a family, and will give the largest part of their attention to these things. They may frequently hold significant responsibilities and commitments in the world, will probably attend classes at the Buddhist Centre, and try to fit their meditation practice into their busy schedule, practicing ethical precepts as best they can. In the East the laity support the monks with alms and in the West their equivalent will often financially support their local Buddhist Centre.

As with Csikszentmihalyi’s three aspects to Creativity, the vitality of the Buddhist tradition depends on the creative interaction of all three. The Forest Renunciant refreshes the vitality of the Institutions when they become tired / ossify; the Settled Monastic makes sure that the teachings of the Forest Renunciant are appropriate; and the Lay Practitioner keeps Buddhism appropriate to the ‘real world.’

(2) The four samgrahavastus or means of unification.